Dynamatic, acquired by Woodlawn in July 2010, is a designer and manufacturer of eddy current variable speed drives, brakes, and controls. The company’s products are used in the water and wastewater industry, as well as in materials processing, chemicals processing, and a number of other industrial markets. Dynamatic was founded in 1931 and is headquartered south of Milwaukee in Sturtevant, WI (www.dynamatic.com). 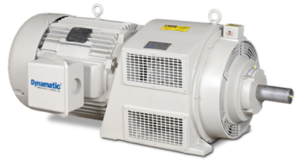 Eddy current variable speed drives have three elements: a constant speed AC induction motor, an electromagnetic clutch, and a digital controller. These elements combine to create a magnetic flux field that can be used to vary the output torque and speed of an industrial device. The stronger the magnetic field, the more of the input torque from the induction motor is translated to the output torque which then varies the speed of the machinery. Many industrial processes – such as assembly lines – must operate at different speeds for different products. Where process conditions demand adjustment of flow from a pump or fan, varying the speed of the drive may save energy compared with other techniques for flow control. When the output speed can be changed without steps over a range, the drive is referred to as variable speed.

“We partnered with the management team of Dynamatic to build the business by expanding distribution and growing in key end markets,” said Greg Bregstone, a Partner at Woodlawn. “We feel that Dynamatic is well positioned to continue its success and growth with TGP.”

Woodlawn Partners invests in companies that have revenues of more than $5 million and EBITDA of $1 million to $6 million. Sectors of interest include manufacturing, property and facility services, information technology, niche financial services, distribution, and transportation and logistics. The firm was founded in 2010 by Partners Greg Bregstone and Evan Gobdel and is based in Chicago (www.woodlawnpartners.com).

TGP Capital Partners invests from $3 million to $10 million in companies with revenues between $15 million and $50 million and EBITDA in excess of $2 million. Sectors of interest include general manufacturing and business services companies. The firm, based in Kansas City, was founded in 2005 and today is led by Managing Directors Eric Graham and Shane Parr (www.tgpinvestments.com).