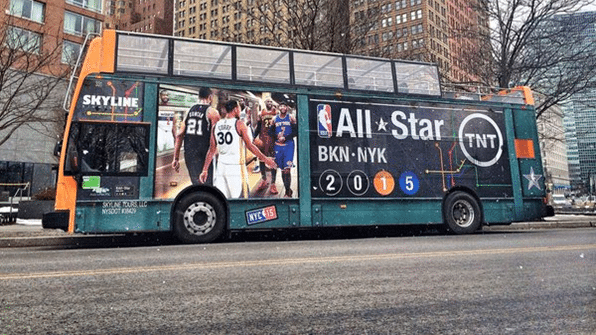 Astra Pacific is an outdoor advertising company that provides high profile outdoor assets including wallscapes, billboards and double-decker bus advertising in the New York, Los Angeles, Chicago, San Diego, and San Francisco markets. Customers of Astra Pacific include many well-known brands in the entertainment space such as Dreamworks, Universal, NBC and HBO as well as Chase, LG, Coca-Cola, AT&T and Land Rover. The company is led by Astred Rodriguez, CEO.  Astra Pacific has offices in New York and Los Angeles (www.astrapacific.com).

AllOver Media (AOM) is one of the largest out-of-home advertising platforms in the US.  The company’s core products include gas station advertising, truckside advertising, indoor advertising, door hangers and cash jackets (cash jackets are branded money envelopes given out at check cashing locations).  AOM’s media products are placed at convenience stores and gas stations, on truck sides and at a variety of indoor locations, including restaurants, nightclubs and sports arenas.  The company provides national, regional or local media plans to its more than 1,000 member customer base.  AOM was founded in 2002 and is headquartered in Minneapolis (www.allovermedia.com).

“This acquisition is a great complement to our existing truckside and bus wrap platforms, and gives us a strong presence with exclusive inventory in some of the top markets in the country,” said Tony Jacobson, CEO of AllOver Media. “Our ability to extend a brand’s presence in these key markets will be valuable to the entertainment category, particularly on the west coast. The double decker bus digital screens are an emerging platform that can really bring a brand’s story to life.”

Audax has been active with AllOver Media and has closed two add-on acquisitions since acquiring the company in March 2015. In July 2015 it acquired the social indoor and the family network divisions of Zoom Media; and – also in July 2015 – acquired Resort Media, an advertising company serving North American winter resorts.