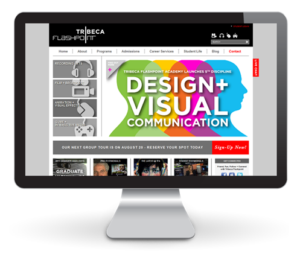 Tribeca Flashpoint Media Arts Academy, a digital media arts college, offers a two-year, career-focused program leading to an associate degree in disciplines including Film & Broadcast, Game & Interactive Media, Recording Arts, Animation & Visual Effects and Graphic Design & Visual Communication. TFA is accredited by the American Council for Independent Colleges and Schools. TFA has achieved strong placement rates across each of its core disciplines. Graduates have taken jobs with such companies as Disney, NBC Universal, Nickelodeon and a variety of other leading media and advertising companies. The school has a downtown Chicago campus and two other learning sites (www.tfa.edu).

“This important partnership between Tribeca Flashpoint Academy and Sterling Partners will arm our young people with the tools to find quality jobs and launch careers in a rapidly evolving digital world, and is the kind of initiative that will help cement Chicago’s position as a hub for exceptional educational institutions for higher learning,” said Rahm Emanuel, the mayor of Chicago.  “Investments like this one — where Chicago-based private equity firms are investing in Chicago institutions — are important to the city’s future economic success.”

“Educational institutions today must provide their students with the technical and critical-thinking skills required to succeed in a workplace that’s increasingly changing, and Tribeca Flashpoint Academy does just that,” said Jason Rosenberg, a Sterling principal. “We are thrilled to partner with the management team led by Howard Tullman as well as with the existing investors, to continue building a world-class program at one of the nation’s leading digital media arts schools.”