Following the completion of a court-supervised sale process launched in January 2020, Borden Dairy has been acquired for $340 million by Capitol Peak Partners and KKR. At closing, Capitol Peak will assume majority ownership of the company, and KKR, an existing lender to Borden, will be a minority investor.

ACON Investments and Grupo Lala, a Mexican dairy company, acquired Borden in July 2017. Upon closing of this transaction ACON and Grupo Lala will no longer have an ownership interest in the business.

Milk consumption in the US has declined more than 40% since 1975 with market share increasingly taken by juice, soda and milk substitutes made from soy or almonds.

Borden operates 12 milk processing plants and nearly 100 branches across the US that produce and distribute nearly 500 million gallons of milk annually. The company’s products are sold through the grocery, mass market, club, food service, hospitality, school, and convenience store channels. Dallas-based Borden has more than 3,300 employees. 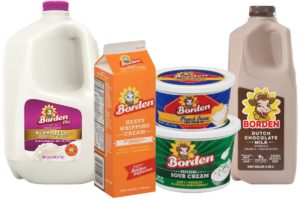 “Borden received strong investor interest and multiple bids throughout this sale process, which is a testament to the terrific work the people of Borden have done to build a valuable and enduring 163-year-old brand,” said Borden CEO Tony Sarsam. “Despite being in the midst of Chapter 11 and a global pandemic, our team managed to generate positive cash flow, grow our customer footprint and maintain an uninterrupted food supply to nourish American families.”

“Borden has a rich history of partnering with America’s dairy farmers and leading retailers to provide wholesome nutrition for American consumers and families,” said Gregg Engles, Capitol Peak’s founder and managing partner. “The Capitol Peak team is excited by this unique opportunity to work alongside KKR and build this iconic dairy company.”

Mr. Engles is the former chairman and CEO of both Dean Foods and, more recently, WhiteWave Foods, the maker of Horizon organic milk, Silk plant-based milk, and So Delicious dairy-free ice cream. WhiteWave was sold to Danone in April 2017 for $12.5 billion.

Capitol Peak was founded in August 2017 by Mr. Engle and Ed Fuggar – the former EVP of WhiteWave – and is headquartered in Denver. The firm invests in middle market consumer product companies with EBITDA of up to $25 million.

“Borden has a long and proud history as a dairy industry leader. We are pleased to join Capitol Peak in supporting Borden and its many dedicated employees through a restructuring that cleans the slate for Borden to start a new chapter,” said Lauren Krueger, a managing director at KKR.

KKR (NYSE: KKR) makes private equity, fixed income, and other investments in companies in North America, Europe, Asia, and the Middle East. KKR was founded in 1976 and in addition to its New York headquarters has offices in 19 cities around the world.

This transaction is expected to close by the end of July.