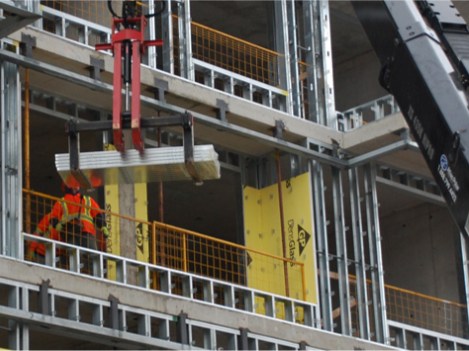 WSB Titan distributes drywall, insulation, lumber, roofing materials, steel framing and other products used in low- and high-rise residential, commercial and institutional markets. WSB Titan was formed in 2009 through the merger of Watson Building Supplies, Shoemaker Drywall Supplies, and Beauchesne Group of Companies. TorQuest acquired the company in 2016. The company is led by CEO Doug Skrepnek and is headquartered in the Toronto suburb of Vaughan (www.wsbtitan.com).

“TorQuest has been an ideal partner for us as we have built and grown WSB Titan. Their integrity, creativity and discipline made them the firm we wanted to partner with for this stage of Titan’s growth. We are delighted with the success of our partnership with TorQuest, and excited about the next chapter of our business evolution as part of GMS,” said Mr. Skrepnek.

For the twelve months ended January 31, 2018, WSB Titan had revenues of $459 million and Adjusted EBITDA of $68 million resulting in a transaction multiple of 9.2x.

GMS (Gypsum Management and Supply) (NYSE:GMS) operates a network of more than 210 distribution centers across the United States. GMS’ products include wallboard, suspended ceilings systems, and other complementary interior construction products. The company, led by CEO Mike Callahan, was founded in 1971 and is headquartered near Atlanta in Tucker, GA (www.gms.com)

With this transaction completed, GMS is now one of the largest wallboard distributors in North America, with revenues of approximately $3 billion and more than 240 branches throughout 42 states and 5 provinces in Canada. WSB Titan will operate as a subsidiary of GMS and will continue to be managed by its existing management team, led by Doug Skrepnek as President of GMS Canada.

“Titan has grown rapidly to become Canada’s leading distributor of wallboard and other building supplies for new construction and renovation. Its tremendous success is a result of the company’s strong value proposition and service delivery excellence, and the hard work and expertise of its many talented and dedicated employees, led by Doug Skrepnek, Gord Coutts and Ryan Shoemaker,” said TorQuest Partner Matt Chapman.

TorQuest was founded in 2002 and has over C$2 billion of equity capital under management. In July 2016 the firm held an above-target final closing of TorQuest Partners Fund IV at the fund’s hard cap of C$925 million. TorQuest is headquartered in Toronto (www.torquest.com).

Barclays Capital was the financial advisor to GMS and Jefferies advised WSB Titan.