The Internet of Things – all those objects that are embedded with sensors and software and that have connectivity capability – will create changes in the very near future that will dramatically affect both consumer and businesses.  The term “Internet of Things” (IoT) was coined by British entrepreneur Kevin Ashton in 1999 and referred to the connectivity of devices, systems, and services beyond just machine-to-machine communications.  Mr. Ashton felt that the creation of “smart” objects would launch a rapid movement in automation in nearly all fields and would create smart homes, smart businesses, smart grids and smart cities.

The IoT is not new to private equity investors.  For instance, in March 2015 Topcon Positioning Group acquired Digi-Star, a company that Baird Capital Partners acquired in November 2011.  Digi-Star is a maker of agricultural weight sensors and control systems for feeding, planting, fertilizer, and harvest equipment manufacturers.  According to Ray O’Connor, president and CEO of Topcon, the buy of Digi-Star was part of the company’s IoT strategy, “At a time when many companies are decreasing their investment in agricultural markets, we are increasingly optimistic about their growth based upon our strong commitment to developing management systems and solutions that bring the power of the Internet of Things to every farm.” 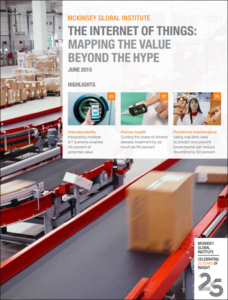 The opportunity provided by the IoT is the subject of a new report by the McKinsey Global Institute titled “The Internet of Things: Mapping the value beyond the hype.” The central finding of the report is that the hype may understate the potential of the IoT and that capturing the value of the IoT by businesses will require an effort to address a set of systems issues, including interoperability.

The McKinsey report reviews more than 150 IoT use cases, ranging from consumer health and wellness monitors to sensors that optimize the maintenance of equipment. The result is that the IoT may achieve an annual economic impact of $3.9 trillion to $11.1 trillion a year by 2025. Putting this in perspective, McKinsey notes that at the top end that level of value would be equivalent to about 11 percent of the world economy.

“A dynamic industry is evolving around IoT technology. Like other technology waves, there are opportunities for both incumbents and new players. Digitization blurs the lines between technology companies and other types of companies; makers of industrial machinery, for example, are creating new business models, by using IoT links and data to offer their products as a service. To realize the full potential from IoT applications, technology will need to continue to evolve, providing lower costs and more robust data analytics. In almost all settings, IoT systems raise questions about data security and privacy. And in most organizations, taking advantage of the IoT opportunity will require leaders to truly embrace data-driven decision making.”

This report on the IoT is an important one and should be read by all private equity investors.  A PDF copy of “The Internet of Things: Mapping the value beyond the hype” can be downloaded free of charge by clicking HERE.